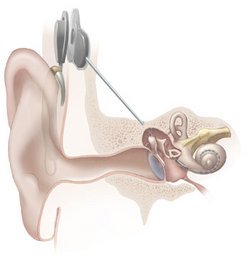 Following is an excerpt from the Wikipedia article:

Cochlear Implants that operate successfully, including those produced by all three major manufacturers (Cochlear Americas, Advanced Bionics, and Med-El), incorporate the same basic design. Henry Ford’s Model “T” automobile of the early 1900s and the Cadillac of the modern era have the same basic design but differ greatly in the details of each final design.

Likewise, all cochlear implants must incorporate the same basic design. The design makes the device capable of the ultimate goal of “detecting” or “demodulating” intelligence from the human voice when that intelligence is residing within an electronic signal.

The successful cochlear implant must also be capable of converting the pattern of the detected intelligence into an appropriate electronic format for application to the acoustic (eighth cranial) nerve, which in turn further transmits the encoded pattern to the hearing center of the brain, where the information is interpreted as meaningful intelligence. That is why implants from all (three) major manufacturers work equally well in functionality but are quite different in final design enhancements.

The design of this basic conversion process was first described by Adam Kissiah, Jr and was first exposed to the public when it was revealed to James O. Harrell, Esquire, Patent Counsel to NASA’s John F. Kennedy Space Center, in July 1974. Mr. Harrell also advised exposure to another person capable of understanding the concept. This was done on August 1, 1974. Subsequent Patent Office search and patent application for letters patent were completed in May 1977. Patent 4063048 was issued to Adam M. Kissiah, Jr. on December 13, 1977; Reissue 31031, which further improved design, was issued in September 1982.

The cochlear implant article can be found at http://en.wikipedia.org/wiki/Cochlear_implant

The Impact of the Cochlear Implant on Society

One thought on “Cochlear Impant Information on Wikipedia”

The Social-Emotional Impact of the Cochlear Implant on Children

History of the Cochlear Implant

What is a Cochlear Implant and How Does it Work?