Skip to content
Home » History of the Cochlear Implant 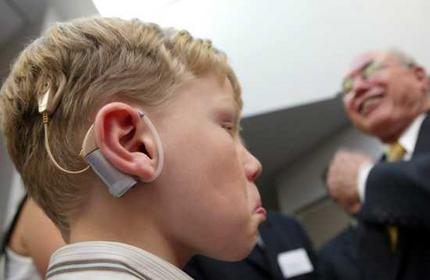 This article provides a brief history of the cochlear implant including who had the original patent and who was the original inventor of the device.

Henry Ford’s Model T automobile of the early 1900s and the Cadillac models of the modern era have the same basic design. All cars possess a frame, four wheels, power source, transmission, steering wheel, and brakes, etc., but differ greatly in the details of the final design.

Likewise, all cochlear implants must incorporate the same basic design to be capable of “detecting” or “demodulating” intelligence from the human voice (especially) residing within an electronic signal.

The successful cochlear implant must also be capable of converting the detected intelligence (pattern) into an appropriate electronic format for application to the acoustic (eighth cranial) nerve, which in turn further transmits the encoded pattern to the hearing center of the brain, where it is interpreted as meaningful information.

That is why implants from all three major manufacturers work equally well in terms of functionality. However, the devices are quite different in final design enhancements.

Design of this basic conversion process was first described by Adam Kissiah and exposed to the public when it was revealed to James O. Harrell, Esquire, Patent Counsel to NASA’s John F. Kennedy Space Center, in July 1974. Mr. Harrell also advised exposure to another person capable of understanding the concept.

This was completed successfully on August 01, 1974. Subsequent Patent Office search and patent application for letters of the patent were completed in May 1977. Patent 4,063,047 was issued to Adam M. Kissiah, Jr. on December 13, 1977. Reissue 31031, which further improved on the design, was issued in September 1982.

A greater understanding of voice intelligence was accomplished as the designs described in Patent 4,063,048 were utilized in subsequent cochlear implants. Although Adam Kissiah was a full-time employee with NASA at the Kennedy Space Center, he participated as a consultant in an implantation program during early 1980;s through license agreement granted by Kissiah to Biostim, Inc.

Biostim, in turn, participated (also by contractual agreement) with Stanford University, Dr. F Blair Simmons, principal investigator, during a series of cochlear implants during that period of time.

Following is a brief overview of the paper:

This paper will provide a brief history and description of the Cochlear Implant, including early research, development, experimentation, and implementation of the implant plus the names of many of the most renowned developers and producers.

Section 2: Adam Kissiah’s involvement in hearing research subsequent to the experience of personal hearing loss onset in the Early 1970s, deriving design of basic specifications for simulation of the electronic functioning of the inner ear (Cochlea) in humans.

Section 3: How our natural hearing mechanism works, and how the Cochlear implant works in the correction of hearing loss.

If you have any questions about the history of the cochlear implant or implantable hearing devices, please post a comment below.